In Maranella we have English Shepherd pipes, Dudey pipes and English Border pipes by Sean Jones and Swedish sackpipa by Alban Faust

English Border Pipes in D made by Sean Jones 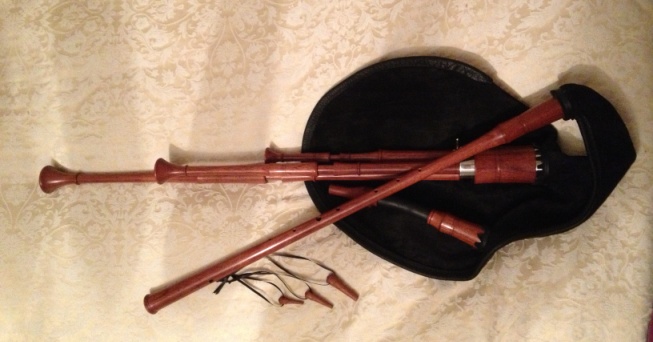 Elizabeth's low D borders have three bell-ended drones.  The sound is fantastic,really rich, full and very beautiful.  The bore is cylindricalwhich makes it quite loud although not nearly so loud as highland pipes - it's still ok to play them indoors - and, crucially, the cylindrical bore extends the range.  By overblowing it is possible to play notes in the second octave giving a total range of an octave and a half.  When Elizabeth plays these pipes in duet with Marilyn on the Swedish sackpipa they don't overpower the cylindrical bore sackpipa and the two totally different types of pipe sound really good together - a bonus we hadn't expected!

Quote from Sean's website: "In Britain the much louder highland pipes have dominated but we have our own version of the French and Flemish pipes, the border pipes.  As the name suggests it was played in the Scottish borders and is now having a bit of a renaissance.  There is little difference acoustically between the traditional French bagpipe and the border pipes ..."


English Shepherd Pipes in G made by Sean Jones 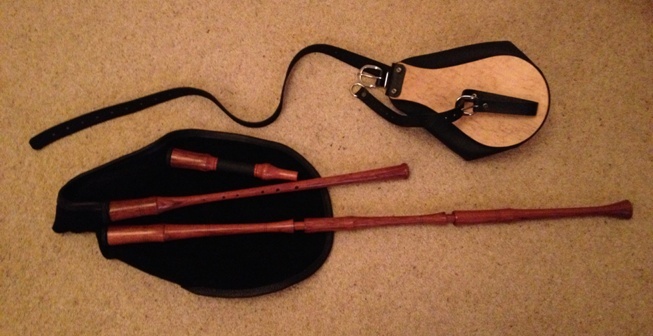 Beautiful, single drone Shepherd pipes in Bubinga wood (a type of rosewood) made by Sean Jones in his workshop in Biddulph Moor, Staffordshire

Shepherd pipes are, in essence, English border pipes but with only a single drone.  Elizabeth's set, in beautiful close-grained bubinga wood, are bellows blown with a switch to make them mouth blown.  Marilyn's set, also from Sean, are in flame bubinga wood and are mouth blown.

Very beautiful Swedish bagpipes in curly grained birch wood with reindeer horn and ebony rings made by Alban Faust in his workshop in Ör, Frestersbyn in Sweden.

Swedish sackpipa are smallpipes i.e. they have a cylindrical bore making the sound much softer and quieter than the conical bore of the border and shepherd pipes.  The cylindrical bore also limits the range to just an octave plus one note.  This particular set of Swedish pipes is in D with a low D drone which can be retuned to C or E making these pipes very versatile.  With the drone stop out the drone is an E so standard Swedish E/A tunes are playable providing they don't go too high. With the drone stop in, the drone is a low D so the pipes can be played with the borders in D where, even though they are much quieter, they are not drowned out because of the totally different timbre.  With the drone tuned to a C the pipes can play tunes in C - three instruments in one !

"The Swedish bagpipes, which is distinguishable by its warm, soft sound, has got many friends throughout the whole world.    My reconstruction of the so called ”Västerdala” pipes is a mixture of the ten preserved instruments we have in the country (there not one is similar to another!). Furthermore my studies of related bagpipes from the continent have been of great benefit.     The Swedish bagpipes is a so called clarinet-instrument, as the sound is produced through a single reed which sits on a cylindrically drilled chanter. Traditionally it is a mouth blown instrument with one short drone (high tuned) which is identical to the lowest tone on the chanter (6 fingering). There is also a single reed in the drone, as in almost all drones." 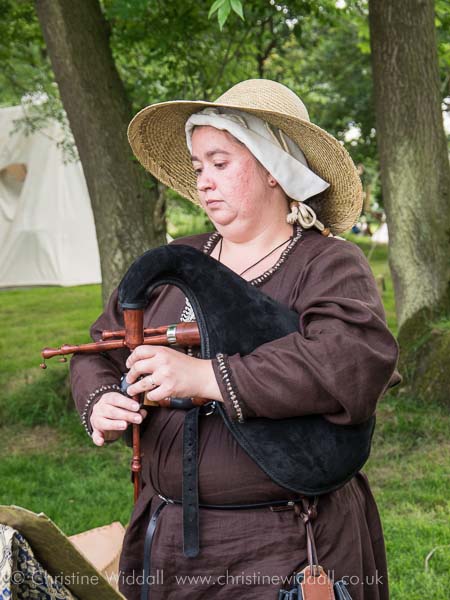 The Dudey is a three drone Hummelchen or 'bumblebee' pipe, the renaissance German smallpipe drawn by Praetorius.  It has a cylindrical bore unlike the border and shepherd pipes which have a conical bore, and is therefore much quieter and softer in tone - like the gentle buzzing of a bumblebee

From Sean's website: Dudey - "The dudey is drawn by Praetorius in the 17th Century.  Its closest modern relative is the Scottish smallpipe.  My Dudey is really a cross-fingering smallpipe designed to have the soft hollow tone of the samallpipes/northumbrian pipes.  The drones provide a solid "humm" underneath the chanter and don't compete with it"

Marilyn's dudey pipes are made from laburnum wood with a brown leather bag.  Like all dudeys made by Sean, they are in D and have three drones, D-A-D.  The laburnum wood darkens over time and these pipes are now a lovely deep brown; eventually the wood will go very dark brown, almost black

Elizabeth's dudey pipes, in flame bubinga wood, are absolutely stunning to look at with the red flamed wood and black leather bag - beautiful. 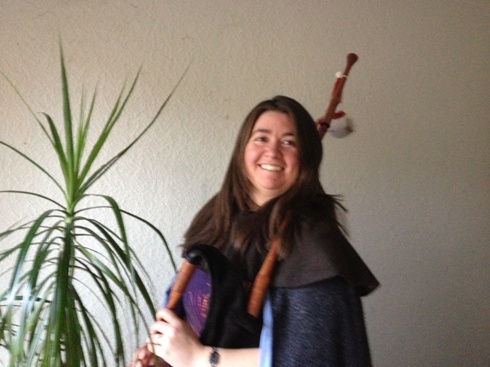